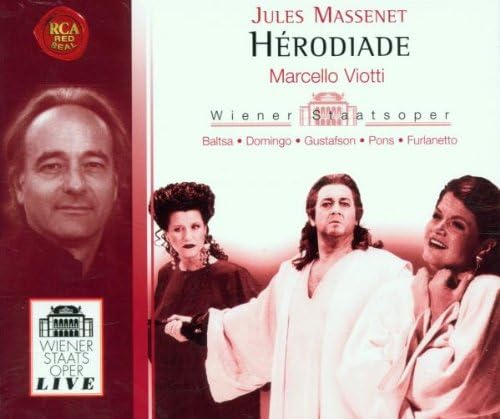 In his biography of Massenet, James Harding tells how Auguste Vaucorbeil, the Director of the Opera de Paris, rejected "Herodiade" not because of the music but because the plot "was badly in need of rewriting". Wikipedia says that Vaucorbeil had told the composer, "as far as the libretto, you badly need an author who knows how to build the skeleton of a play". "Herodiade" was first produced in Brussels, then, where, in fact, it triumphed. It had to wait for forty years to be produced at the Opera although it had received an Italian performance in Paris two years after the Belgian premiere. Harding goes on to say that the Theatre de la Monnaie gave "Herodiade" "a fine production" with "an excellent cast". The opera is full of colour and spectacle; the drama is almost of secondary importance. So, a "fine production" and "an excellent cast" would , in themselves, help to guarantee success. On record, though (and there is no commercial video recording available), "Herodiade" can seem longwinded and dramatically rather incoherent. There is, though, no shortage of fine music. In fact, "Herodiade" is overflowing with melody.A good case can be made, then, for cutting this opera and, in this performance, many of the choral scenes have been excised altogether or shortened. If you know "Herodiade" well from Michel Plasson's EMI recording, you will be more than a little startled. The booklet's track listing does not even divide the opera into the original four acts but just thirteen scenes. The drama has also been tightened to the extent sometimes of reordering the musical numbers. The duet for Herod and Herodiade during which she complains about her treatment by Jean is now placed at the end of the act ( called Scene 4 here ) instead of immediately after Salome's aria, "Il est bon, il est beau" and "Vision Fugitive", the famous saxophone accompanied aria in which Herod makes his infatuation with Salome clear, is delayed until the scene in which he encounters her guarding Jean's cell and is distracted from his intention of releasing the prophet. The booklet gives details of the reasoning behind these changes which extends beyond dramatic considerations. The argument that, in Vienna in 1995, "the terrible lessons of the violent upheavals of the 20th century had been taken to heart [ and ] there was no longer a general willingness to tolerate onstage the actions of a state [ sic ], martial music and choruses of war contained in such a score" seems odd but may reflect a fundamental difference between French and German (or Austrian) views of the function and nature of opera. Certainly Plasson had no qualms about recording "Herodiade", which is, after all, very much in the tradition of French Grand Opera and, as such, should not, perhaps, be taken too seriously, absolutely complete and unaltered in his recording made in Toulouse a year earlier. Originally the opera had created controversy in France, not because of any suggestion that it contained too much "martial music" and too many "choruses of war" but because of what was perceived as the near blasphemous nature of the plot. John the Baptist, Christ's precursor in love with Salome! ( I wonder if Vaucorbeil, privately at least, shared this reservation. ) The Archbishop of Lyon even excommunicated Massenet and his librettists. How times change!After the interpolation of "Vision Fugitive", the rest of "Act 3" ( called Scenes 8, 9 and 10 here) proceeds unaltered, a few minor cuts in the ceremonial and dance music apart. Unlike in the recording conducted by David Lloyd-Jones, the final scene which includes what is one of Massenet's most seductive melodies, first sung to the words "C'est Dieu que l'on te nomme", is, thankfully, not curtailed. Act 4 ( called Scenes 11, 12 and 13 here ) is also largely unchanged although the "Romains" chorus is drastically shortened and the ballet is omitted entirely. Thus the denouement is not delayed. For Viotti, it is the drama which matters above all.A glance at the cast list will not lead you to expect much Gallic charm or finesse in the singing. For that you must turn to the Plasson recording where, for example, Cheryl Studer is far better cast as the teenage temptress than Nancy Gustafson in Viotti's recording. In fact, Gustafson and Agnes Baltsa as Herodiade, Salome's mother, are almost interchangeable. ( Listen to the final scene. ) Viotti's is, then, very much an Italianate performance, concerned with presenting "Herodiade" as drama and not as pageantry and, as such, it works well. Everyone gives their all and Viotti's dynamic conducting as well as copious amounts of applause contribute to the sense of occasion. It is a pity that the performance was not filmed.Plasson's recording (or, alternatively, Gergiev's fine live recording on Sony) remain unmatched but Viotti's, rather like David Lloyd Jones' on Opera d'Oro, would make a worthwhile supplement, especially if you can find it at a reasonable price. The recording is excellent. I should add that the set does not come with a libretto.
Bei diesem CD-Album wirken zwei der grandiosesten Sänger-Darsteller Künstler zusammen, Agnes Baltsa und Placido Domingo, die kaum zu übertreffen sein werden, in welcher Rolle auch immer sie bislang zusammen auftraten. Ein wahrer Genuss diesen beiden Künstlern in diesen sehr schwierigen Rollen als Herodiade (A. Baltsa) und Johannes (P. Domingo) zuzuhören.
はじめての方へ
経営学